Forest Sauvage is a Faerie land located within Logres. Once much smaller, it has grown following the death of King Uther to encompass several neighbouring areas, including the country of Tribuit.

When King Uther died, the kingdom shattered. Since "the king is the land and the land is the king," forces that would normally be kept at bay were released in the heart of Logres. The wild lands grew stronger and threatened to overwhelm the civilized regions. People nearby were disturbed by the speed at which the land goes wild — almost violently it seems — and they are troubled by the occasional unnatural creature that ventures forth from it. But they are helpless except to observe it.

At the center of Logres, the forests grow thicker so that the former roads become trails, the former trails become paths, the former footpaths become game trails. The region becomes known as the Forest Sauvage.

People outside of Sauvage remember that cities and castles are within it, and they can point out where the old roads and paths end, but they are not sure who now rules there, nor how far it is to the next castle, city, or village.

The following map shows the location of some noteworthy places within and near the Forest Sauvage: though due to the Faerie geography some locations, such as Castle Sauvage itself, are not well mapped. 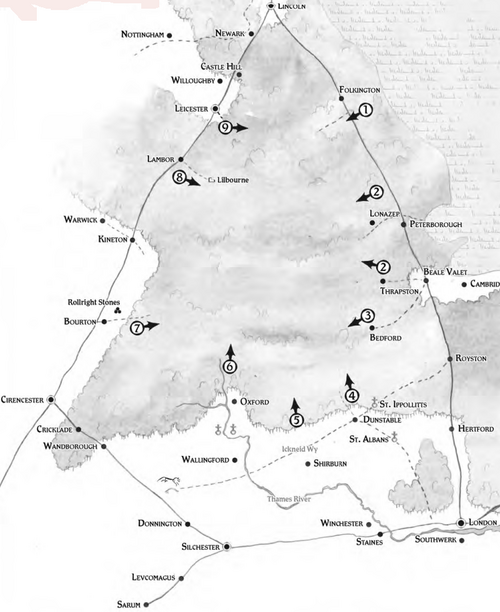 Locations Within the forest SauvageEdit

The following is a partial

Retrieved from "https://kingarthurpendragon.fandom.com/wiki/Forest_Sauvage?oldid=4806"
Community content is available under CC-BY-SA unless otherwise noted.